Today’s lesson is the text book, 'Toutchstone' unit6 'Around town' (exploring the city)
Q What do you know about Istanbul?
A It's a historical interest place.
Once Roman Empire occupied here.
It was divided into east and west in 395.
This place became the captal of Eastern Roman Empire, that is, Byzantine Empire. And the name of this place became Constantinople, named for the emperor of those days.
And it came to pass, in 1453, Byzantine Empire was destroyed by Ottoman Empire. Then Constantinople became the capital of Ottoman Empire. Istanbul(old name Constantinople) has been an important intersection way of Eastern-Western (European and Asian) trade and military affaires for a long time. 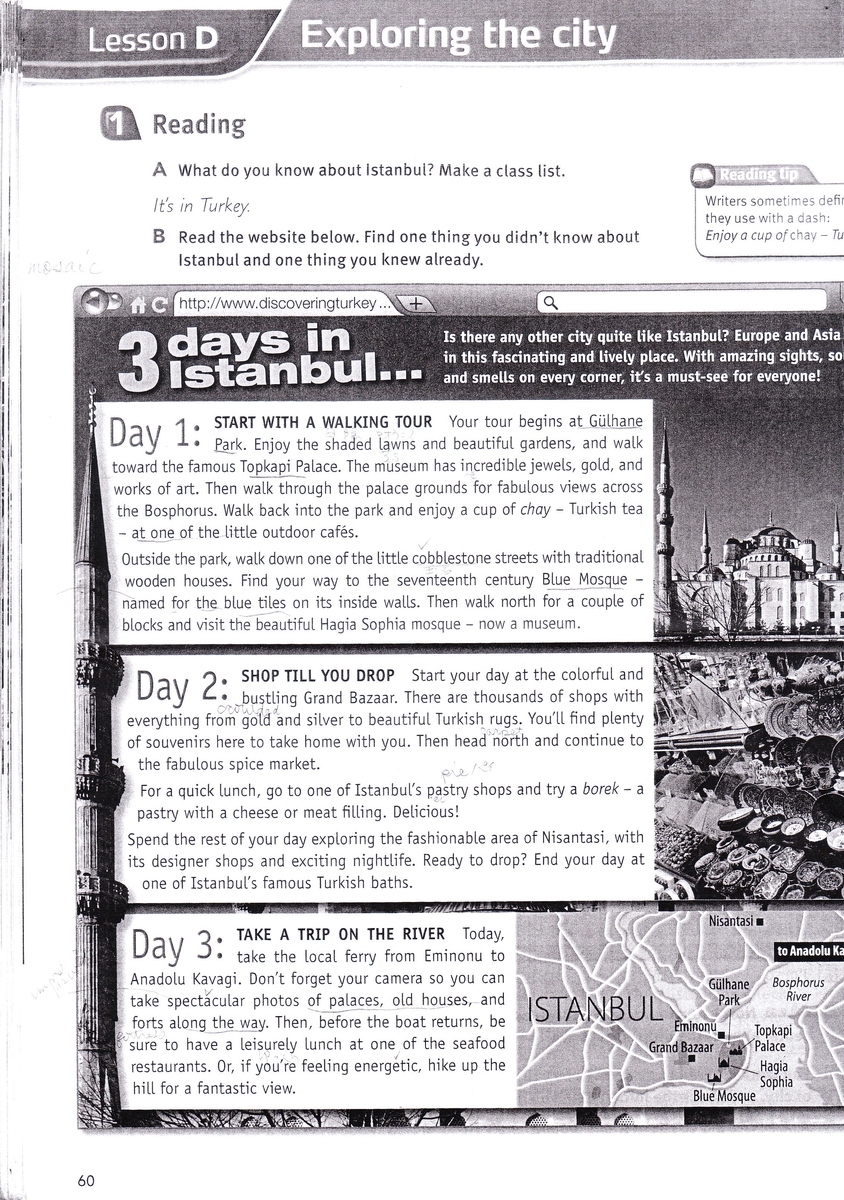 Here is a talk from ラジオ英会話.
Topic is script to tell partner news
First story is that two colleagues are talking about one's promotion.
a Wow, I haven't been to a cafe in ages.
b Really? I come here almost every day.
Are you serious? You must be ric! What's new with you?
b Well, the job is going great. The company wants to promote me again.
a Again? Ware you just promoted recently?
b Yes. Believe it or not, I'm not interested in being promoted.
a Why not?
b I still need to learn a lot more in my current position.
key sentence is I'm not interested in being promoted.
We use these phrases when we tell partner news surprisingly.

For example
Believe or not, Joe is seventy years old.
You will find this hard to believe, Harry actually bought a round of drinks last night.
incredible as it may seem, many of my students never heard of the Beatles!

Second story is that Tom is dumped to Masami.
a Masami, you've won again. You are such a great shogi player.
b No, I'm not. I know you always let me win on purpose. You are the brst player in this club.
a No. I just can't concentrate on the game.
Because well you're so beautiful.
b It's hard to tell you this, but I'm going to quit this club.
a What? But then I won't see you any more.
b I'm not your girl friend. Good bye, Bob.
a Wait. Maami.
key sentence is it's hard to tell you this, but I 'm going to quit this club.
We use these phrases when we would tell partner what it's hard to say.

For example
It's hard to tell you this, but I saw your girlfriend with another guy.
I hate to say this, but I'm allergic to nuts, sorry.
I regret to inform you that we'll not be extending your contract.

Third story is that a two students are talking about the university which one is going to advance.
a Guess what, I 've been accepted into an Ivy league school!
b That's great news, but, I thought you were going to study in the UK. Ivy 7league schools are in the US, aren't they?
a Yes, but I applied to some coleges in America as well.
b Right. So, which colege is it?
a Ahh, it's a secret.
b Come on. Shiho. You know you can trust me.
a Well, OK. But you must promise to keep it under your hat.
key sentence is Guess what. I've been accepted into a Ivy league school.
We ude these phrases when we tell partner news excitingly.

For example
Guess what. I wont won the English Speech contest!
You 'll never guess what my boyfriend got me for my birthday.
Can you believe it?
She dumped me by text message

For example
you're not supposed to play football here. you could break a window.
You must not put on any more weight. Can you try a diffrent diet.?
I don't think you should move the fridge by yourself.Why don't you ask Steve to help you?