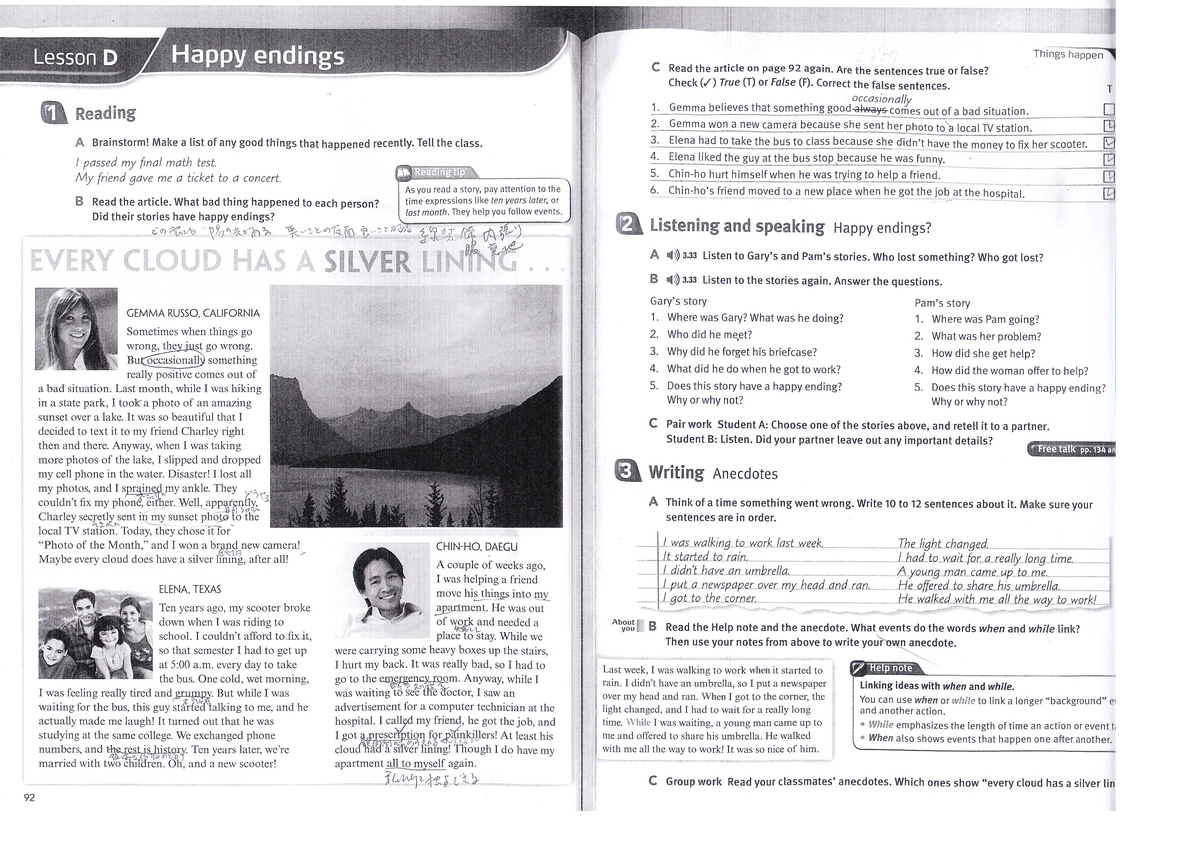 One day Gary took a breakfast at a cafeteras. He found his old high school friend there. They talked so much that he left his bag there. He noticed he forgot it. Later that day, as usual while he was listenning radio at work, he catched the news about  his forgotten bag in listening the Radio's announcement.  his friend called him and told his friend sent his forgotten bag to the police station. At last his bag turned back to him.

Pam was going to her friend's wedding receiption. She left her house and went to that destination country hotel by her car.  Without navigation system, she got lost. As she was confused, she asked a woman to the way she wanted to go.That woman tole her to follow her car. They arrived at the hotel the woman taught her. But that hotel was a diffrent one which had the same name. Her true destination was far from there. At last she was late for the receiption for half an hour.

2. Here is a talk from ラジオ英会話.

Topic is script to point out the important passing over, think outside the box, consider to the partner, farewell, see you around.

First story is two students  are talking about Soccer match.a Well, the final soccer match is tomorrow. I hope we win.

b It won't be easy. You must admit that the all blacks are a strong team.

a Yes. Their  defense is incredible.

b But let' not forget that we have a home-field advantage.

a That`s true, but we can't be overconfident.

I 'll give a pep talk to the team just before the match.

b You are a great captain, Morgan.

a Thank you, Darsha.

Key sentence is You must admit that the all blacks are strong team.

You must admit that she is a better leader than Tom.

Don't forget that just being a nice guy is not enough to make a goosband.

Keep in mind that the traffi

c will be quite heavy at that time of the day.

Second story is Two colleagues are talking about unsold goods.

a I read the latest sales report. We didn't sell enough of our winter down jackets.

b I guess we have to send them to the warehouse.

a No, we can't put them there. New items are coming in for spring.

b Well, we could have a sale, and sell them at reduced prices.

a We always do that. We have to start thinking  outside the box.

b Well, maybe we can make them into something else.

Key sentence is We always do that. We have to start thinking outside the box.

We need a more creative solution. So let's start thinking beside the box.

We have to look at the problem with fresh eyes if we want to find a solution.

Have you ever thought about it this way?

Third story is Mission Control and spaceship are talking about the incident.

a Ma'am, we have a problem with the main engine on the spaceship. It doesn't look good.

b As leader of Mission Control, my duty is to get those astronauts safely back to Earth.

a No disrespect intended, ma'am,  but I don't think you understand the seriousness of the damage.

b  With all due respect, Martin, it 's your job to maintain the engine in good order, so go and show us how good you are.

Key sentence is No disrespecd intended, I don't think you understand the seriousness of the damage.

No disrespect intended, do you really think you can handle this?

With all due respect, I think you need to  negotiate more aggressively.

We got the better of you. No hard feelings, right?

The last story is two students promise a date.

a Well, you were right. This roast chicken is prety good.

b Yes, I think it's the best thing they service in this cafeteria.

a Oh, by the way, Helen. Do you like morzart?

a I have two tickets to a morzart concert on Saturday night?

Sure. See you around!

Key sentence is see you around!

I'm looking for seeing you at the party. Take care.

Thank you for riding.See you later.